In our last update, I mentioned that I thought the hot, dry summer might have resulted in low productivity -- fewer young birds fledged. Fall banding is an excellent way to assess productivity, as the ratio of young to adult birds is easy to tally. Here at RRBO, about 81% of the birds we band in fall are young-of-the-year, known to banders as "hatch-year" birds. This is fairly typical, although coastal banding stations may see 90% or higher, since young songbirds often follow slightly different migration routes than adults, and seem to favor coastal routes.

So far this fall, the number of adult birds we are banding has been unusually high. Sometimes we see this in individual species, but it seems like it is across the board so far. I took a look at the first month of fall banding for all years prior to this year combined, and noted that 86% of the birds banded were hatch-year birds. Since we begin banding in August, we usually start out banding a lot of the recently-fledged resident birds, especially catbirds, so the slightly higher percentage compared to the overall fall average is expected. This year so far, only 68% of the birds have been hatch-year. 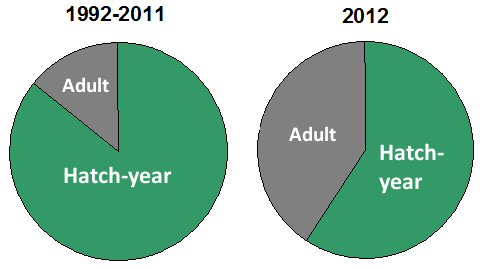 We will have to see how this plays out over the season. I am especially concerned at the overall low numbers of American Robins and Gray Catbirds, especially young birds. I will address these in a future post.

Let's look at a more cheerful graph -- the composition of warbler species banded so far this fall. 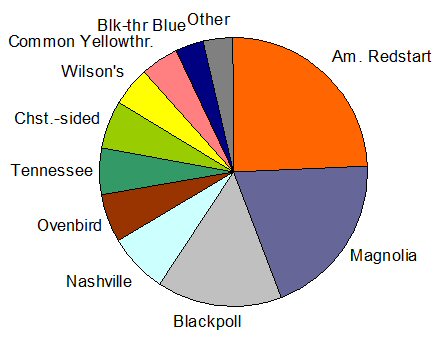 The "other" category are three species for which only single birds have been banded: Black-and-White, Cape May, and Palm Warbler.

Since it's so early in the season, it's hard to say whether or not some of these species will be banded in larger numbers than usual. Nashville Warblers are one our most frequently-banded species; they have a long migration period so this graph is not very revealing. My gut based on the last 20 years is that redstarts may end up being more numerous this year than usual. Right now they comprise 24% of the warbler species banded. The overall fall average is 12%.

It looks like the summer-like weather is gone for the next week, and a dramatic shift in the jet stream over the coming days is likely to bring in lots of birds. Stay tuned.

This is really interesting Julie. My son was monitoring nests this year and doing some heavy duty birding, so this is the first year that I feel like I've observed juvenile birds in a big way. I've seen so many of them that even though it was a dry year and I had been concerned, I felt like the birds had had a productive year. That's not science though, just anecdote, so it's interesting that what's actually showing up IS actually matching the drought and early spring bloom effects on the birds.