Our study of the fruit composition of the diets of fall migratory birds focuses on Catharus thrushes and the super-abundant non-native fruits found in urban areas. However, we do look for seeds in the "samples" (droppings) provided by all the birds we band. This helps us examine which other bird species are eating fruit, what types of fruit they consume, and whether the diets of different bird species favor different fruit species.

One of the native fruiting plants that is common on our site is poison-ivy (Toxicodendron radicans). The flowers are rather insignificant and can be overlooked. 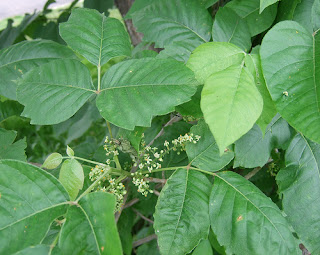 They do result in fruit, and large mature vines produce good crops of small, off-white drupes. This often occurs overhead, where the vine has climbed up a tree and gets good sun exposure. 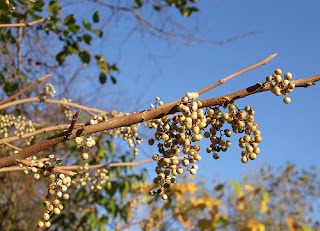 This portion of poison-ivy is growing on a fence where it gets direct sun, and each fall it has a lot of fruit.

Poison-ivy fruits themselves are about half the size of a pea, quite dry, and papery. They contain very little pulp. Each fruit has one to three, odd-looking, globular seeds that are very distinctive. 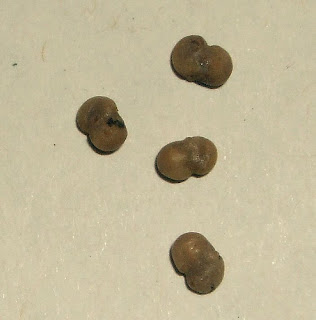 We find the seeds in samples from only a few species of birds. Most often it's woodpeckers, and we've gotten poison-ivy seeds from Downy and Hairy Woodpeckers, and Yellow-shafted Flickers. The sample below is from one dropping from a flicker. 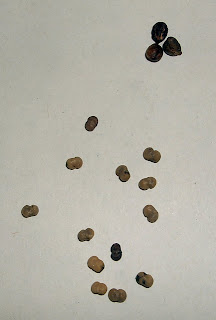 The three seeds in the upper right are from wild grapes (probably Vitis riparia). The other 13 are poison-ivy. Over the past several years, the only other bird species contributing poison-ivy seeds has been Yellow-rumped Warbler. 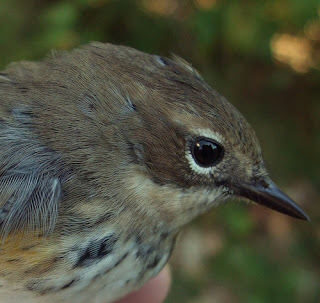 When we find seeds in a Yellow-rump sample, it's always poison-ivy. The other day I was holding a Yellow-rump while writing down some data. Suddenly, a single poison-ivy seed shot out of the warbler! Usually, we just collect the seeds that are deposited in the holding bags we use to transport the birds from the nets to the banding lab.

This week, we got two poison-ivy seeds from a Ruby-crowned Kinglet, the first seed samples of any kind we've had from a kinglet. This particular bird was first banded on 7 October, when it weighed 6.3 grams. We recaptured it several more times. On 12 October, it weighed 6.7 grams, on 16 October it was 7.2 grams, and on 18 October it was 7.4 grams. It doesn't sound like much, but that's a 17.5% increase in the bird's original weight.

Poison-ivy fruit are very high in fats (over 40%) and low in sugars. Not all birds are able to easily or efficiently digest and absorb fats. Differences in digestive physiology, as well as the varied nutritional needs among residents,  long-distance, and short-distance migrants has a great influence on fruit choice.

In the special case of poison-ivy, the fats in the fruits are also of a waxy (high melting point) nature, and only a few bird species are able to process plant waxes. The eastern form of Yellow-rumped Warbler, found here, is called "Myrtle Warbler" because of its ability to eat the fruit of wax myrtle (Myrica sp.). Poison-ivy fruits are very similar in composition to myrtle fruit.

You may wonder if the compounds (urushiol) in poison-ivy that cause a skin rash in most people are present in the fruit. I'm not entirely sure; some sources say yes, others indicate they are only present in the sap, and therefore only the stems and leaves. In other plants with urushiol, such as mangoes, the fruit does not contain the poison. I'm not very sensitive to poison-ivy, and I have not had a problem handling the seeds once pooped from a bird.