Readers will recall that my husband Darrin O'Brien and I like to do "working" vacations, where we travel to Latin American countries to do bird banding, bird surveys, and/or insect survey work. Usually, this involves work on coffee farms, as coffee grown in a sustainable manner is critical to "our" migrant birds, and therefore a topic of great importance to me. Last year we went to west-central Mexico, and in 2009 it was Nicaragua. We returned this year to Nicaragua, taking part both in the same project as 2009, as well as visiting a new location. Here are some highlights of our recent trip. I'll do it in two parts.

We started out, as we did in 2009, working with a North Carolina group doing some banding at the shade coffee farm, Finca Esperanza Verde (FEV). A recap of the 2009 trip is here, and more details on the coffee farm itself are here.

In 2009, there were five banders, including us. This year, we were two of three. During banding sessions, we were super-busy! I have a bum knee, so Darrin had the roughest set of nets to check. Nearly everything in coffee country is up or down, and we were at 1150 meters elevation. He often came back to the banding area out of breath. All the nets were in the coffee production area, which at FEV is under a lovely canopy of shade and interspersed with thick forest patches. 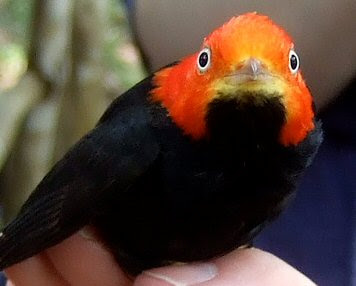 We were pretty excited to catch this male Red-capped Manakin (Pipra mentalis) on the first day. Aside from being very cool and crazy-looking, this is the species that "moonwalks" during its courtship display. The next day, we caught a female Long-tailed Manakin (Chiroxiphia linearis). Female manakins are generally dull green, but this family of birds are dependent on forest where they seek out a variety of fruit to eat. Catching them at FEV was evidence of the quality of the forest there. 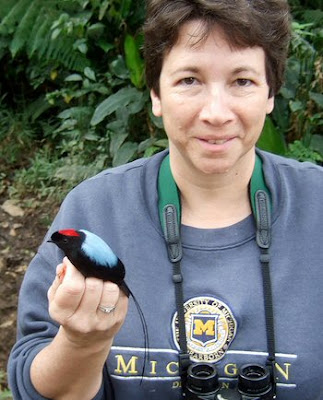 On the third day, we caught a male Long-tailed Manakin. He was a real crowd-pleaser! 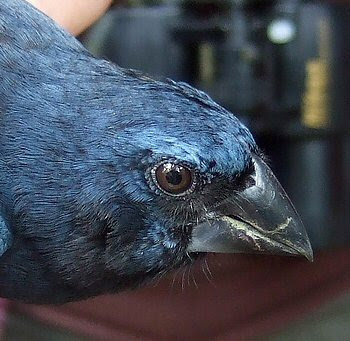 Another blue-colored bird we caught was Blue-black Grosbeak (Cyanocompsa cyanoides). They are a little smaller than our Rose-breasted Grosbeak, and, frankly, didn't seem to bite as much.

One thing we did was take photos of the spread wings of most of the tropical resident birds we processed. Our knowledge of molt strategies and ageing of these birds is limited, and the Institute of Bird Populations is requesting such photos. 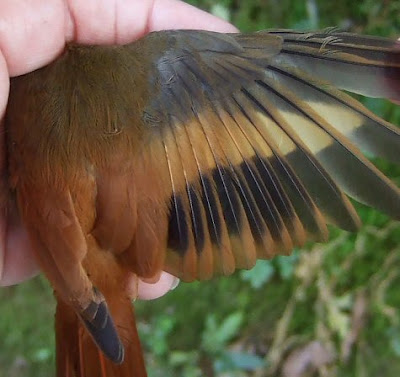 This is the wing of an Olivaceous Woodcreeper (Sittasomus griseicapillus), a member of a large family of birds that behave similar to woodpeckers or our Brown Creeper. 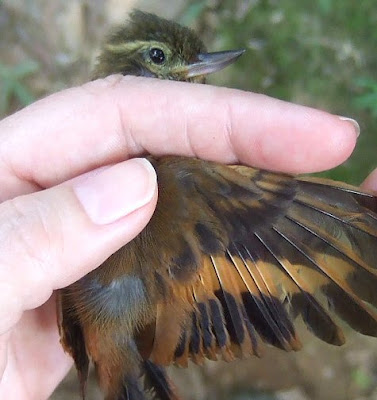 And here's the wing of the unrelated Plain Xenops (Xenops minutus). Xenops are also bark-foraging birds that will cling to tree trunks or branches, extracting insects with their wedge-shaped bills. I think the similarity in the wing coloration between these two unrelated birds is quite interesting. 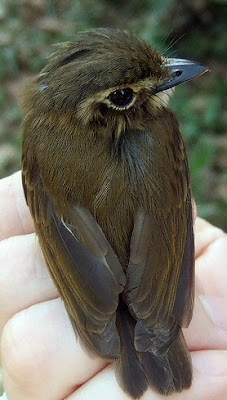 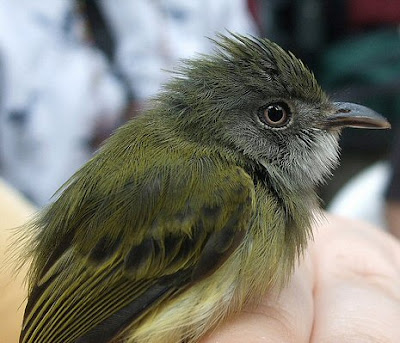 Here's another resident flycatcher with an interesting bill -- a Northern Bentbill (Oncostoma cinereigulare). This was one of several we banded, and two were recaptures from 2008!

Of course, many American migrants rely on shade coffee farms in Latin America, and our interest in this issue is how we got involved in these visits in the first place. The most common North American-breeding migrants at FEV are Wilson's Warbler, Tennessee Warbler, Baltimore Oriole, and Wood Thrush. 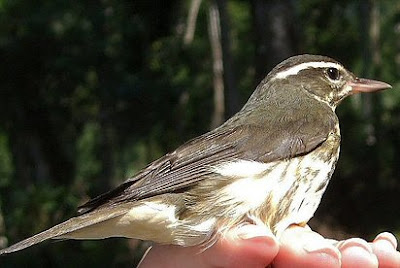 Here's another: Louisiana Waterthrush (Parkesia motacilla). This waterthrush was a recapture, and had first been banded at FEV in 2006. That's at least five round trips between the U.S. and Central America. It had also been recaptured a year or so ago, underscoring the winter site fidelity of many migrants, and how important it is that their habitat remains intact during all parts of their life cycles. 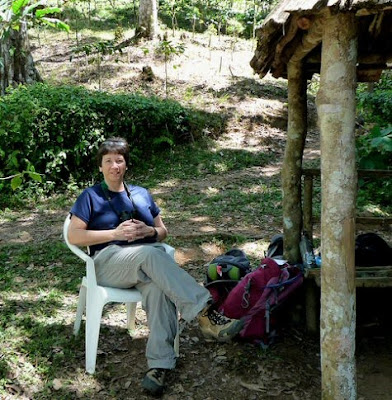 There wasn't a lot of time for relaxation, but we were grateful to the FEV workers for bringing down a couple of chairs to the little spot where we had the banding area set up.

I think we banded around 60 birds in our three morning sessions. We caught fewer hummingbirds than we did in 2009, I think because the flowering phenology was different due to the very wet La Niña conditions this winter. More Guilford College students were on this trip, and everyone got a chance to learn about bird banding and participate in the process. Our thanks to John Gerwin of the North Carolina Museum of Natural Sciences, Lynn Moseley of Guilford College and her students, and Dave Davenport of EcoQuest Travel for not only allowing us to come along, but putting up with all of our niff-naw as well.

After five days, it was time to say goodbye to FEV and the Guilford group, and head to north of Jinotega for our stay at another coffee farm, El Jaguar. It will be the subject of my next post.