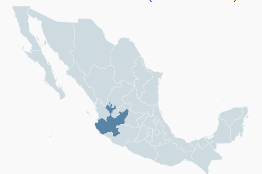 My husband Darrin and I have just returned from a trip to the western state of Jalisco, Mexico (highlighted above). You might recall that last year we went to Nicaragua where we conducted bird and insect surveys and did some bird banding on a shade coffee farm. This Mexican trip was sponsored by Rocky Mountain Bird Observatory in Colorado, which has done a great deal of work in this area. Our trip supported conservation work in Jalisco, an area where there are many endemic bird species found nowhere else in the world.

While our itinerary took us to several locations, I'll focus here on a visit to the Las Joyas research station in the Sierra de Manantlán Biosphere Reserve, where we, too briefly, learned about and lent a hand in one of the longest-running and most intensive bird banding projects in Mexico.

The Sierra de Manantlán Biosphere Reserve covers 1400 km² (roughly 350,000 acres). It was established in 1987, after being acquired by the government to preserve a large population of a rare species of wild maize, Zea diploperennis. The 345 km² of tropical dry forest in the reserve is the largest of its type protected in Mexico, and the 50 km² of cloud forest portion is the largest protected on Mexico's Pacific slope. Much of the land in Mexico is owned communally under the ejido system. Because there are so many landowners, biospheres in the country are structured so that there is a core area in which little or no human impact is allowed, and a buffer zone where managed activities such as sustainable agriculture can take place. A general map of the area is here.

The Las Joyas field station is operated by the University of Guadalajara in the core zone, and is not open to the public. If you put these coordinates <19.586010,-104.274028> into Google Maps or Earth and zoom in on the marker, you can see the buildings as well as the remoteness. The station is quite rustic, with solar power and outhouses with composting toilets. We slept in a dorm, 4 beds to a room, with thin walls that did not keep out the night-time chill at nearly 2000 meters! We were also warned to use a flashlight and beware of mountain lions and jaguars if we went to the outhouses at night. Four other wild cats are also common there: bobcats, ocelots, margays, and jaguarundis. Alas, we did not see any of them. 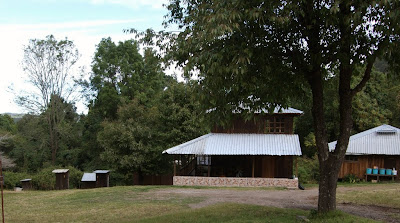 In the center is the dorm at Las Joyas; outhouses at left and kitchen at right.

The area around the dorms was full of bird life. The most common species were many usually-hard-to-see Crested Guans (Penelope purpurascens), roosting in the trees and flying back and forth; multiple sallying Tufted Flycatchers (Mitrephanes phaeocercus); several male Brown-backed Solitaires (Myadestes occidentalis) in constant song; and a pair of uncharacteristicly cooperative Blue Mockingbirds (Melanotis caerulescens). Singing Quail (Dactylortyx thoracicus) and Long-tailed Wood-Partridge (Dendrortyx macroura, a Mexican endemic) also lent their voices to the morning chorus; we got great looks at the wood-partridges at the compost pile.

The banding "station" is a table set up along a trail. Ten nets are run two days a week all year long, manned by station regulars and students working on various projects. I was very impressed by the speed and skill of the student banders, as well as the many scientific publications which have resulted from work here. 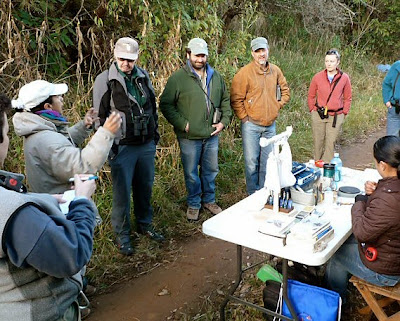 At left, University of Guadalajara's Sarahy Contreras explains some background of the banding project at Las Joyas, in which she has been involved for many years.
We just didn't take enough pictures. The pace of bird captures was steady in the morning. The students or Darrin and I were nearly always off checking nets, extracting birds, and bringing them back to the banding table. We were happy to help out even as most of our group went off for a walk.

The most common North American migratory species were Wilson's Warbler and Nashville Warbler. Most of the birds were residents, though, and a lot of them were hummingbirds. 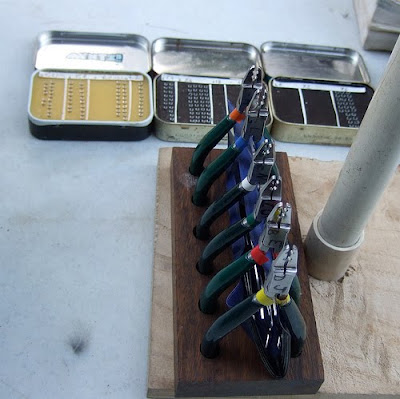 They had a whole range of tiny hummingbird bands arranged in mint tins, and an array of special banding pliers to put the bands on. Some species we had that day were White-eared, Magnificent, Rufous, and Berylline Hummingbirds, and Green Violetear.
Here are a few of the highlights for me: 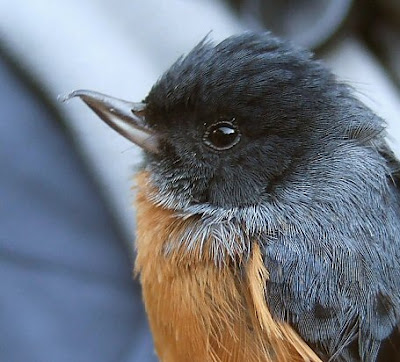 Cinnamon-bellied Flowerpiercers (Diglossa baritula) feed on nectar. The long hook at the tip of the bill is used to hold flowers firmly, while they stab the base of the flower corolla with their pointy lower bill and extract nectar by inserting their tongues through the slit. This is done incredibly fast! This is a small bird, perhaps the size of a Magnolia Warbler. 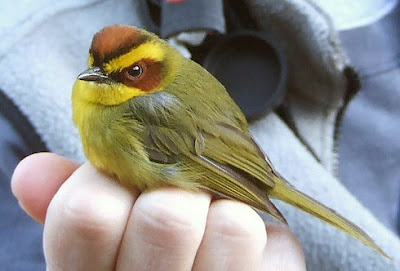 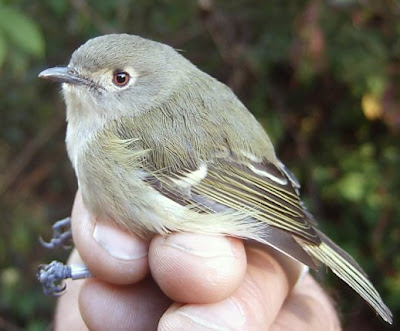 Dwarf Vireo (Vireo nelsoni). I think this was the only bird we heard in the field but only saw in the hand. It is a very poorly known species endemic to Mexico. It's nearest relative is the endangered Texas-breeding Black-capped Vireo (Vireo atricapillus) -- one of which we also saw at a lower elevation! Black-caps have a very restricted wintering range in western Mexico, and the bird we saw was banded, most likely at the same wintering site by Sarahy two years before.

Of course, as in Nicaragua, I was happy to get an opportunity to handle a couple of south-of-the-border Catharus thrushes, related to the birds I study here at RRBO. 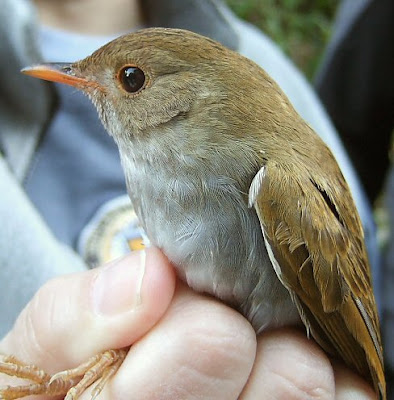 Here is an Orange-billed Nightingale-thrush (Catharus aurantiirostris). They are smaller than a Hermit Thrush, generally the smallest Catharus thrush we get here in Michigan. 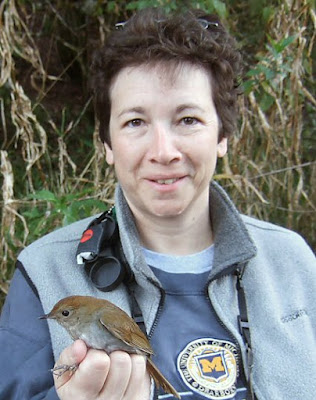 And here I am with a Russet Nightingale-thrush (Catharus occidentalis).

Our small group tallied around 250 species. Many thanks to Arvind Panjabi, Sarahy Contreras, Eduardo Santana, and Siux Diaz for hosting this great trip.
Posted by Julie Craves
Email ThisBlogThis!Share to TwitterShare to FacebookShare to Pinterest
Labels: Banding

Julie,
Great review of your trip. Thanks for including such terrific photos.

enjoyed your trip report Julie. Those are some beautiful birds (and I love their common names as much as the photos)

Nice report. I enjoyed the golden-browed warbler. Migrants haven't moved much in Florida.

Excellent post giving us some insight in the banding procedures. Golden-browed Warbler was my favorite as well. Thanks for the Solitaire link by the way.