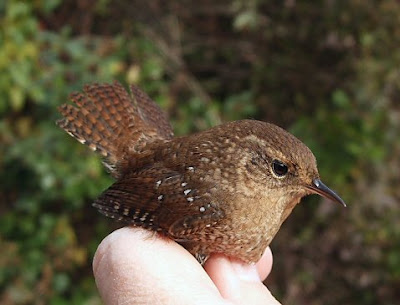 The brown birds of fall have arrived. Here's our first Winter Wren of the season. This species has a very broad range across the Northern Hemisphere. In England, it known simply as the "Wren." In Germany, it is called "Zaunkoenig," which translates to "King of the Fence." An evocative and accurate description for these little balls of fiesty attitude! We often seem to catch them early in the morning. Extracting from a mist net what amounts to an energetic and slippery ping-pong ball in dawn's dim light is one of banding's challenges. 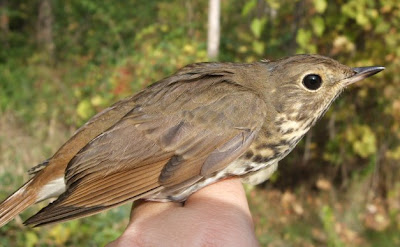 Another brown bird of fall is the last of the Catharus thrushes to migrate through, the Hermit Thrush. This is my favorite of the thrushes in my study, although I like them all. They can be very common this time of year, although so far they have not reached a peak here by any means.

Our #1 species right now is the American Robin. Early October is the peak of migration for them, and the time when large numbers in wandering flocks are descending on campus. Because migration has been relatively slow this fall, I've been coming in on my days off whenever the weather is okay. The first net run or two in the morning can be loaded with robins. I had to drag my good friend Jim "The Big Bwana" Fowler out of banding retirement earlier this week to help out in case I got swamped with robins. 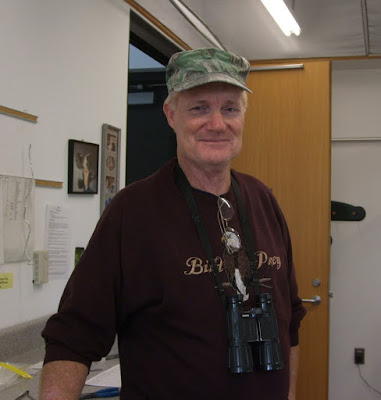 Dana Wloch is the UM-D student in charge of identifying and compiling all the seeds found in the droppings of robins and species other than Catharus thrushes, so she's pretty happy with all the robins right now. 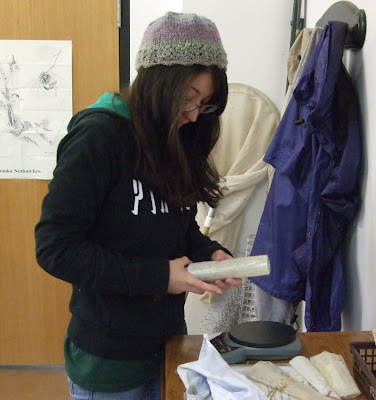 The other group of brown birds that are abundant this time of year are the sparrows, especially White-throated Sparrows. They have certainly arrived, but not yet in the numbers I expect. The non-brown sparrow that is conspiciously scarce so far is the Dark-eyed Junco. We've only seen a few so far this fall. That should change in the coming week.
Posted by Julie Craves
Email ThisBlogThis!Share to TwitterShare to FacebookShare to Pinterest
Labels: Banding