Seven days of surveys yielded 95 species on campus for the week ending 20 May. We tallied over 80 species on both 16 May (82) and 18 May (86, our season high so far). On 18 May, there were 23 species of warblers recorded, with the only regular expected species missing being Cape May.

New spring arrivals this week included Lincoln's Sparrow on 15 May; Black-billed Cuckoo, Blackpoll Warbler, and Mourning Warbler on 16 May; and Yellow-bellied Flycatcher and Olive-sided Flycatcher on 17 May. Also notable were American Woodcock and Golden-winged Warbler on 18 May.

The last couple of days clear nights with south winds swept most of the migrants away, and we await another wave. Flycatchers remain quite scarce. We've had very few Eastern Kingbirds, one Yellow-bellied Flycatcher, and only a couple of sightings of Alder/Willow Flycatchers. Least Flycatchers have been consistent, but we've not recorded more than three on any day. Also conspicuous in their rarity have been Yellow Warblers, which are typically very common. Five has been our top count. Black-throated Blue Warblers are usually less abundant, but have also been rare this spring so far.

Elsewhere in Dearborn...
The big stony vacant lot at the corner of the Southfield service drive and Rotunda has been Dearborn's shorebird "hot spot." On 14 May, a Dunlin and a Semipalmated Sandpiper showed up there. These were both 3rd city records. All week there were plovers (up to 10) as well as one to five Least Sandpipers. Another Dunlin showed up on 20 May for the fourth city record. Horned Larks have been regular, American Pipits have been seen several times, and on 15 May a Northern Mockingbird was seen running around catching bugs! 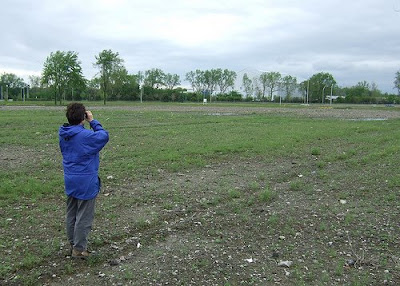 Among the lumps and rocks, small shorebirds can be tough to see. Several of us have been checking the lot daily. Sometimes visits 20 minutes apart can yield completely different results! 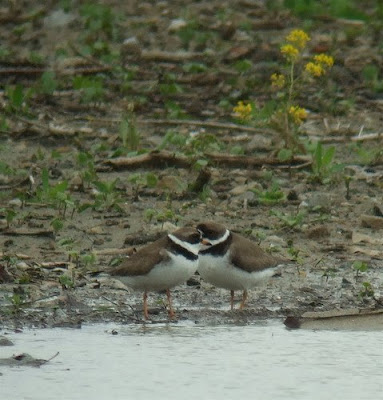 "Psst. I think someone is watching us." Two Semipalmated Plovers. 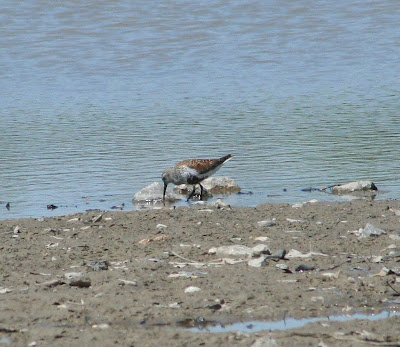 Other faunal news...
Truly odd was this Beaver photographed by Mike O'Leary at the Greenfield Village oxbow pond. We'll see how much tree trimming the Village allows! 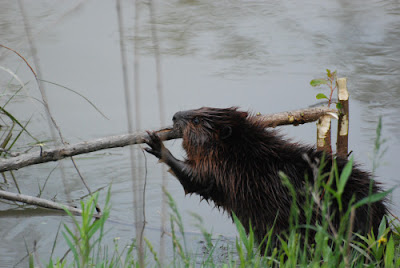