Important note: Although RRBO has ceased operations, I am still collecting data. Please see this page for how to send me your sightings!

People continue to leave me comments on my previous posts about European Goldfinches in the U.S. (see list of posts below). I am still keeping track, especially of breeding records. In addition to accumulating reports from proactive observers, I also periodically look through birding listservs and eBird records. Unfortunately, any Illinois records put in eBird are filtered out of public view, but the state reviewer is working on changing this. Even so, I still have over 50 records of well over 100 birds from the past few years just in southern Wisconsin and northern Illinois alone.

Here's a map from a previous post, showing the Wisconsin and Illinois counties highlighted in red where the bulk of reports of European Goldfinch come from. 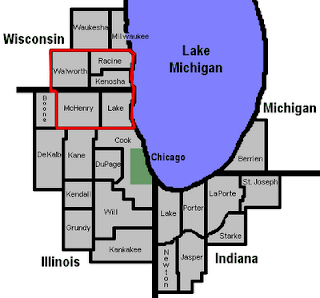 In a previous post, I documented nesting in Waukegan, Illinois, which is in Lake County. Later, I found a report online of a family of European Goldfinches at Waukegan Beach on 13 August 2009, consisting of five birds: two adults, and two juveniles, with the fifth bird likely also a juvenile. The observer posted this photo on Flickr. The day before the photo was taken, another observer saw a minimum of 13 European Goldfinches foraging in a weedy area in what appeared to be two to four family groups in an area just adjacent to Waukegan Beach.

In 2011, European Goldfinches were reported nest-building at Waukegan Beach. A report in April 2012, just a couple weeks ago, also mentioned them gathering nest material. So it seems a breeding population is well-established in the Waukegan area.

These may not be the first European Goldfinches to have nested in Illinois, as there was also a report of birds nest building at Montrose Point in Chicago, Cook County as early as 2003.

In Wisconsin, the breeding population seems centered in the Racine area of Racine County. That is around 25 miles north of Waukegan. My previous post documented a juvenile in 2009 in the Racine suburb of Mt. Pleasant. Subsequently, I received a report in late July 2009: the Scheefs in suburban Racine reported on a juvenile showing up at their feeders shown in this post.

I also heard from Sarah Anspaugh of Racine, who took the photo below of a European Goldfinch family. A pair showed up at her feeder on 13 May 2009, appeared periodically through June, and on 8 July 8 there were 2 juveniles with them. 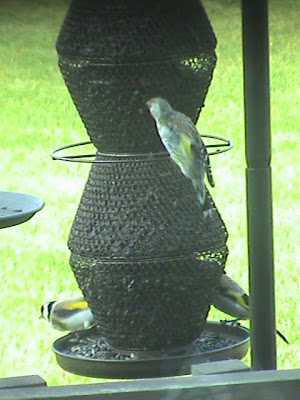 Jane Scheef of Racine contacted me again in 2010. The pair in her neighborhood arrived at her feeder on 29 June with 5 young in tow, shown in the photo below. 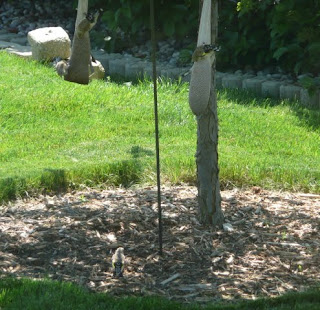 I think that an eBird report of six to eight coming to a feeder in Racine in late winter 2011 may be the same residence. The largest flock I have heard about was that of 30 on 4 December 2011, also in Racine (I think this checklist is the exact location).

Finally, in between Waukegan, IL and Racine, WI is Kenosha, WI, where a correspondent named Donna has had at least one pair of European Goldfinches at her feeders. In June 2011, she photographed them with three young. She recently wrote me that a pair is currently coming to her feeders.

Unlike American Goldfinches, European Goldfinches typically nest in May and June, so be on the lookout and keep sending those reports.

Here are my other posts:

I have read that the US populaton is a result of a number of subspecies ut mainly of Carduelis group and some Caniceps. Has there been any cases of interbreeding between the two groups in your reports. Caniceps would probably find local conditions similar to its original range with same extreme of temperatures. Though Carduelis is very adaptive as I found in Australia.

Sadly, as far as I know, nobody is really studying the breeding population in the Midwest. I keep track as reports come to me, but since I am not in the immediate area I can't observe and monitor what's going on. But you're right -- many of the reports are of caniceps, and I'm sure there are not barriers to cross-mating. In fact, given the low population densities (relative to the structure in the wild) I'm sure they are probably not very fussy about which race they mate with.