The month of September drew to a close on a windy, rainy note -- the 9th full day of banding missed this month due to weather. Notable mid-way through the season is the near total absence of sparrow migration, with only two White-throated Sparrows banded so far, and no noticeable movement of Swamp, Song, or Lincoln's Sparrows. 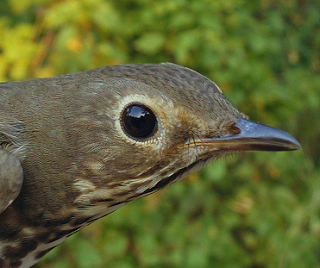 Thrush migration has also been dismal. Gray-cheeked Thrushes are never numerous, and Hermit Thrushes have yet to arrive, but Swainson's Thrushes (left) are one of our bread-and-butter birds. Our average for Swainson's Thrush is 70, and a number of years we have topped 150. Our lowest year we caught 24, and we are tied for that number right now. It sounds like other banding stations are also below average. South of us, Black Swamp Bird Observatory was at 131 Swainson's Thrushes as of mid-month, and their mean is 480. If you have any thoughts or observations on thrush migration in the eastern U.S., please feel free to leave a comment! Looks like we'll have to put in at least one more year to increase our sample sizes for our dietary study.

Speaking of which, many trees and shrubs are still laden with late-ripening fruit. I don't ever recall having any substantial crops of arrowood (Viburnum dentatum) or elderberry (Sambucus canadensis) into September, yet these trees have had fruit most of the month, some still coming ripe. The Amur honeysuckle (Lonicera maackii) crop, a non-native, is still only about half-ripe. On the final day of September, I found multiple plants of this species, as well as gray dogwood (Cornus racemosa), woodbine (Parthenocissus inserta), and Japanese honeysuckle (L. japonica) still blooming! This year we have large crops of wild grapes (Vitis spp.), poison ivy (Toxicodendron radicans), and non-native climbing nightshade (Solanum dulcamara). Does anybody else think fruit crops are a little tardy this year? 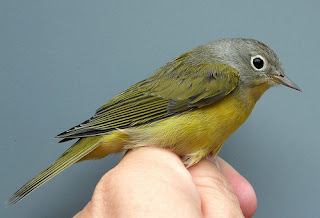 Good numbers of warblers, relatively speaking, are still moving through, although we have yet to see Yellow-rumped Warblers in any numbers. This past week we exceeded our high number of Nashville Warblers (above), with 60 banded so far (our fall mean is 28). Two more uncommon species were also banded this period. 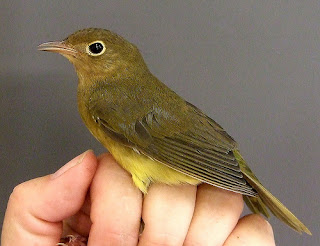 This Connecticut Warbler was banded on 27 September... 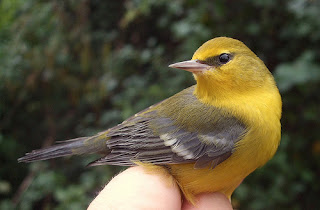 ...and so was this female Blue-winged Warbler. The Blue-winged is actually much rarer here in fall than the Connecticut. This is only the fourth Blue-winged Warbler we've banded in fall, whereas we've banded over two dozen Connecticut Warblers.
A reader asked for an update on the condition of American Robins, since I mentioned in our week 1 summary that the young robins we were catching were quite emaciated. For the month of August, the average weight of young robins was a full 5 grams below the average for previous Augusts. For August and September combined, it was about 1 gram below average. However, our sample size for this fall is very low. The ratio of young robins to adults is very out of whack. Normally for August-September, 75% of the robins we band are young. This year, it's only 36%. This is really surprising, since productivity (as judged by the multitude of young robins we saw this summer) seemed very high. What happened to them? Was there high mortality among other underweight robins? Unfortunately, we will probably never know.
Let's hope October brings us better weather, and more robins, catbirds, and thrushes!
Posted by Julie Craves
Email ThisBlogThis!Share to TwitterShare to FacebookShare to Pinterest
Labels: Banding