The last two weeks were characterized by some odd weather. Week #6 (19-25 Sep) featured a return to summer, with very warm weather and substantial south winds, not so good for migration. Last week (26 Sep-2 Oct) began with more of the same, and ended up with an ubrupt change to more autumn-like conditions, although wind and rain were involved. Thus, five full and two partial banding days were lost to weather.

For the period, we had 189 birds of 35 species. The wide diversity of warblers typical of mid-September began to give way to the birds of fall: White-throated Sparrows, Hermit Thrushes, more American Robins. Blue Jays are migrating right now, and we've been catching more of them. It's pretty easy to tell a young blue jay from an adult. As in quite a few species, there is a difference in the shape of the outer tail feathers. In young birds, the first set of tail feathers is usually more pointed: 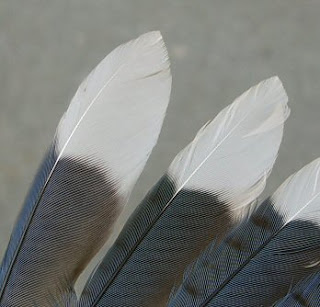 In older birds, these feathers tend to be blunter: 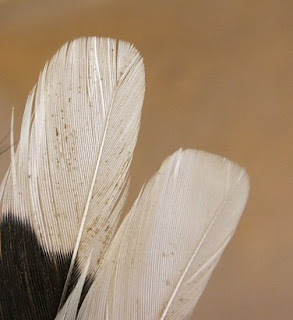 In theory, this can help you age the bird. In practice, if a young bird loses its tail feathers, they will grow back with the adult form. So if a jay has adult-shaped feathers, you need to have at another characteristic to verify the age. The primary coverts (the feathers that cover the bases of the outer flight feathers) and adjacent alula of young jays are dullish blue-gray or brownish-blue: 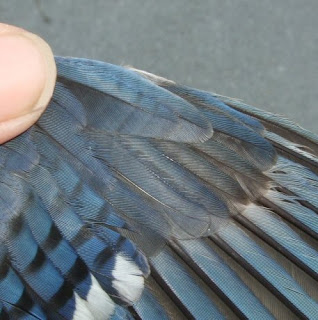 In adults, they are brighter blue, and usually barred: 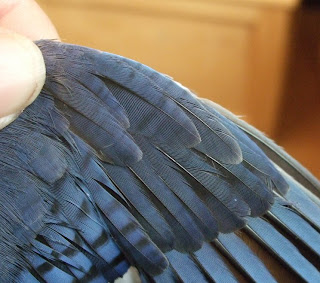 These photos aren't the greatest to illustrate this -- in a lot of jays the differences are pretty obvious, while these individuals were not the best examples.

We had nine recaptures of birds we previously banded. The highlight was the Indigo Bunting that turned out to be oldest Indigo Bunting ever reported recaptured by a bander in North America. There were four birds from last year (Downy Woodpecker, Black-capped Chickadee, American Robin, Song Sparrow), and three from 2008 (Hairy Woodpecker, 2 Gray Catbirds), and a Northern Cardinal from 2005. 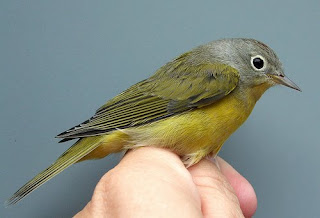