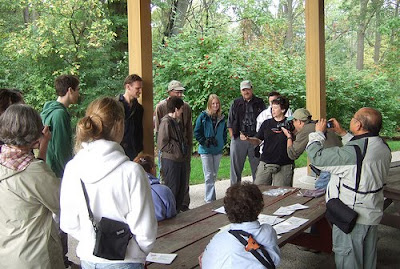 Things picked up this week, although overall the weather was quite uncooperative, with rain or wind cutting down our hours substantially. We began the week with a Detroit Audubon Society field trip, which occurs around this time every year. It's an informal morning of talking about RRBO's research, answering questions, discussing the species that we bring out to show the group after they've been banded and just before they are released. This year there was a nice variety of birds. The photos below were taken by Bill Rapai, of Grosse Pointe Audubon. 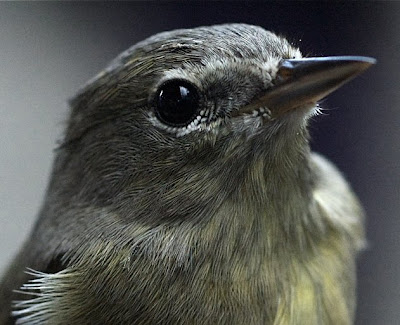 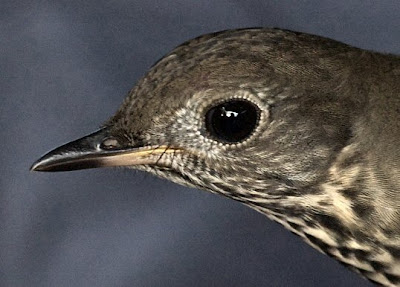 Gray-cheeked Thrush. Speaking of which, one was
recaptured twice this week that ended up gaining
a whopping 12.8 grams over 11 days -- that's a
gain of 40% of it's original mass! I have had other
over-achieving Gray-cheeked Thrushes over the years,
including one that gained 16 grams. I don't have an
answer why this particular species would pile on so
much fat at this relatively early stage in their
migration (they winter in northern South America). In
these situations, I usually recapture them more than
once over 10 days or so in which weather doesn't seem
to be a factor in delaying their departure. They are
often recaptured the first time quite fat, and just get
fatter every time I catch them.
I've been training a new bander this season, Guadalupe Cummins. She is an environmental science graduate student here at UM-D, and I'm trying to convince her to work on a project having to do with birds. She began extracting birds and banding them on her own this week. 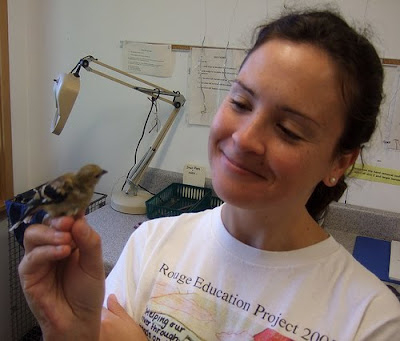 "Probie" and a goldfinch.
Speaking of student projects, we have now collected over 100 samples of bird droppings from robins and catbirds to examine for seeds (and far fewer from thrushes). Robins are especially productive, although sometimes they don't wait until they are in a bag to provide a donation. I carry little glassine envelopes to collect any errant seedy blobs, so long as I can attribute them to an individual bird. This activity has been the source of a lot of amusement and a variety of suggested names and titles. I'll leave you with the winner. 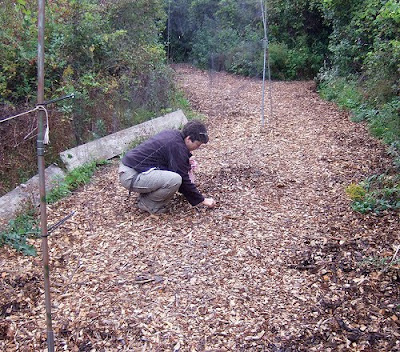 Julie Craves, the Number One of Number Two.