Another slow week has gone by. We finally broke 400 new birds banded this week, after 28 days of banding. This time of year, we can expect to band 400 birds in a week. Other folks in the western Great Lakes have also complained about this being a really lousy migration so far. The culprit: the jet stream has for the most part been stubbornly parked at a high latitude, through the middle of central Canada. It's been in this general position since mid-August, a highly unusual situation. Migration is strongly influenced by weather systems, and weather systems are influenced by the jet stream. Rather than going into this here, I'll put some links together in my next post.

We did have a few mildly interesting days. The predominant warbler has been the Blackpoll, followed by Magnolia (below) and Nashville. 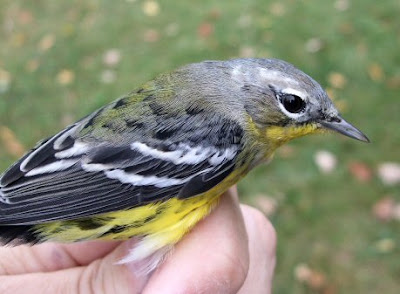 This is the time of year when we get very large flocks of blackbirds, mostly Common Grackles and lesser numbers of Red-winged Blackbirds, along with some Brown-headed Cowbirds and (if we're lucky) Rusty Blackbirds. So far, it has only been grackles, and they seem to have arrived/gathered a little early this fall. They mass on the oak trees, ripping off acorns, and carpet the forest floor flipping through the leaf litter. Because of their weight, grackles don't "stick" in the banding nets very well, but it isn't unusual to catch a whole batch of them if they are moving through the net lanes. This is never very fun. They can (do!) pinch quite hard with their sharp bills. They also have very strong feet and it can be uncomfortable if they grab on and get a toenail stuck in your cuticle.

I happen to think that grackles are pretty handsome, but right now they are molting. The one below is a young bird, molting from its dull juvenile plumage into the more typical glossy garb. Judging from the color, this is probably a male. The wing feathers are also molting, or I'd be able to tell which gender by the length of the wing -- males are larger than females. 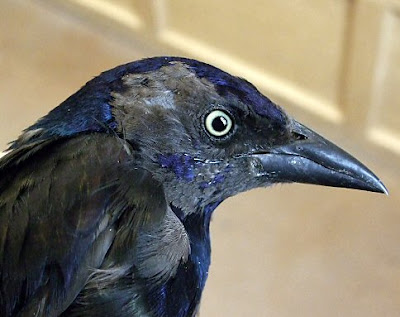 Speaking of toe nails, here's a robin with pale nails; they are usually dark-colored. We see a number of birds lacking pigment in their nails every season. Often it is Gray Catbirds and robins for some reason. 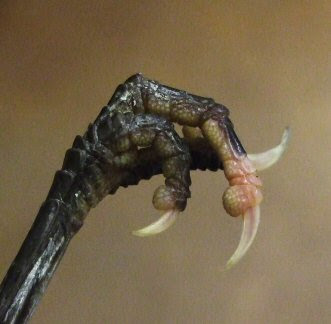 As you'll see in my next post, the jet stream and weather systems are finally on the move. So long as we can avoid rain and wind, things should pick up next week.
Posted by Julie Craves
Email ThisBlogThis!Share to TwitterShare to FacebookShare to Pinterest
Labels: Banding